Thanks to the thousand odd people for subscribing the blog feed and following me on Twitter! I’ll try to keep up the occasional rants.

Recently, a friend was exhibiting his paintings for the first-time. At the small gallery, he was standing next to a pair of unaware visitors gazing at the large frame on the white wall, when he overheard one of them say “well even I could do this”. My artist friend smiled, and walked away to grab a cup of coffee. 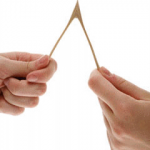 Most people have ideas, some small, some grand. Ideas for fixing the leaking tap, or painting modern art, or building a successful online business, or making a short film, or becoming a master chef. Ideas can be related to anything that interests you in your personal or professional life. Ideas are great, because they give us something to look forward to. Ideas have the capability to generate remarkable excitement and enthusiasm, sometimes even higher than a dose of certain drugs, and sometimes equally addictive.

Ideas can be simple, or ideas can be complex, or they can be plain weird – like selling fake wishbones, for example. But ironically, a lot of ideas people have are like wishbones. They are useless without execution. Ideas are more or less a multiplier. A mediocre idea with decent execution is far, far more valuable than a brilliant idea with no execution. Be it an amateur or a professional, it all comes down to execution. The rest is all talk, and talk is cheap.

I have realized that ideas which remain unexecuted for long periods of time, will most definetly never be executed. It tends from the fact that ideas should be important to you in the first place. The execution of an important idea is almost immidiately initiated. If an idea is not important in your life, then you’ll keep lacking motivation to drive it, you’ll keep finding excuses to avoid it, and you’ll keep delaying action on it subconsciously. There’s nothing wrong with ideas going bust, but what’s important is to continuously find new ideas (in different segments of interest if possible), and execute at-least some (if not all) of them.

As for the selling fake wishbones, someone made a million dollars in annual sales from doing just that.

Memoirs of a Spore - I

Earlier this year I worked on an experimental sci-fi short film, “…

For decades, intelligence has been defined too narrowly. Either you are considered…