Lately, I’ve been focusing on attaining more discipline in my professional life as a startup founder. It had become apparent to me that I needed to step up and make it happen. Striving for it has raised an interesting question in my mind — could positive thinking be delusional at times, and consequently counter-productive? 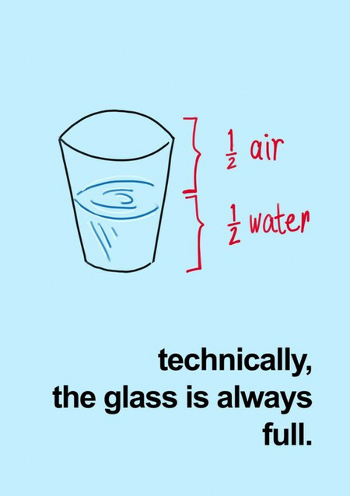 You see, a positive mindset can often lead to a mirage, a state of daydreaming that fools us into believing that we are self-aware and in complete control. Most people have to confront sloth, as I did too, due to the comfort zone nested by immoderate hopefulness.

For centuries cognition has tricked on humans into believing their actions are completely thought-out and preplanned. Modern psychology says otherwise. Much of human behaviour is still rooted and influenced by our “old brain,” the part of our mind controlling the survival instincts that kept our ancestors alive. This subconscious stimulus (optimism bias, updated 9 Oct) keeps us going, but the downside is that hopefulness can very easily make us less determined. Laziness can give way to lack of focus and procrastination, and before we realize it our positive thoughts would silently slide plans into dormancy.

A recent opinion piece in the New York Times also reflected on this phenomenon:

What if all this positivity is part of the problem? What if we’re trying too hard to think positive and might do better to reconsider our relationship to “negative” emotions and situations?

..visualizing a successful outcome, under certain conditions, can make people less likely to achieve it.

Ancient philosophers and spiritual teachers understood the need to balance the positive with the negative, optimism with pessimism, a striving for success and security with an openness to failure and uncertainty. The Stoics recommended “the premeditation of evils,” or deliberately visualizing the worst-case scenario. This tends to reduce anxiety about the future: when you soberly picture how badly things could go in reality, you usually conclude that you could cope. Besides, they noted, imagining that you might lose the relationships and possessions you currently enjoy increases your gratitude for having them now. Positive thinking, by contrast, always leans into the future, ignoring present pleasures.

Positive affirmation should be more like an expression of joy and less like a stressful effort to stamp out any trace of negativity, the article expresses rightfully. It’s a valid measure, which should apply to our work (workplaces) as much as it applies to our lives. Many businesses, particularly the bigger ones, ruthlessly reinforce optimism with beliefs like “stay upbeat at all times” or “quick wins for big growth”, more so at times of a slow-down or recession. The prevailing financial crisis in many ways is an outcome of such over-optimism, as one other article speculates:

No one was psychologically prepared for hard times when they hit, because, according to the tenets of positive thinking, even to think of trouble is to bring it on.

You see this happening in the way Human Resources departments reframe language to make it sound more positive. ‘Negative feedback’ has become ‘areas for improvement’. A ‘demotion’ has become ‘a new opportunity’. ‘Problems’ have become ‘challenges’.

So if optimism is as myopic and hazardous for us as pessimism and if neither is superior, then what could be a more effective mindset?

Maybe realism is one such alternative — the ability to be prepared for the worst, but still believe for the best to occur. Just like many successful businesses, people can rationally get it right by setting practically high goals, putting contingency plans in place and having gratitude for everything that creates (a sense of) abundance in their life & work.

Even my 4 year old daughter is wise to learn that “you get what you get, you don’t get upset.” As for her wishful thinking to feast on dessert each night, she is learning to be thankful for having that privilege and also to stay prepared for not receiving it each night.

Don't Stop Talking About Your Ideas

A tweet this morning pointed to an article titled “Stop talking…

How Can Hackers Help In The Fight Against Cancer?

When 1 in 3 humans are affected by a disease, it needs…